You are here: Home / Motherhood / Six Memorable Moses Moments for His Sixth Birthday!

Some of our most memorable Moses moments! A look back at our time with our now six-year-old Boxer dog. We’re also sharing some of our favourite pictures of him over the years, including his first-ever photo at three days old! 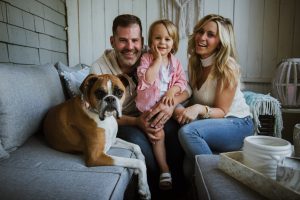 Moses is six! Every time the words come out of my mouth, I tear up. If you follow us on Instagram, you know how obsessed we are with our pup. He certainly has made life interesting, and definitely more fun! It seems like just yesterday, we were bringing him home for the first time. In honour of Mo’s sixth birthday (check out his birthday cake recipe here), I want to share six memorable Moses moments throughout these six years. First, a bit of history of how Mo came into our lives. 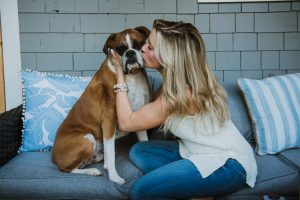 Our family always had dogs growing up. Blue #1, then Blue #2 (both Springer Spaniels), Jesse the Black Lab, and Cheeka the Chihuahua. My husband Ryan, on the other hand, never owned a pet. Early in our relationship, I told him if he was ever game to get a dog, he could pick the breed, the sex, and even the name! It didn’t matter to me. I just wanted to have a dog in the house. He told me he had always wanted to get a male flashy fawn Boxer and name him Moses. About a year later (summer of 2012), in the living room of our home, he passed me his phone to surprise me with a photo of our new baby – a three day old Moses! We went to visit him days later and took him home at two months. 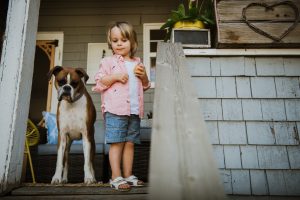 We got Moses from Lookaways Boxers out of Tofield, Alberta. The only boy out of a two-pup litter, he was our guy (even if there were 10 boys, we would have still picked him)! 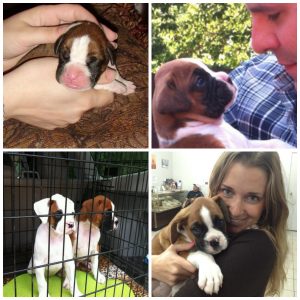 Mo was around six-months-old and we had just started leaving him out of his crate to roam the house while we were gone. Ryan was away for the weekend and I was heading out for dinner with a girlfriend. Our couch had a tiny tear in it where the stuffing was poking through. I took one look at it before I walked out the door and thought to myself, “I sure hope he doesn’t go at that.” A few hours later when I walked through our front door and looked at the mirror in the front hallway which reflected the living room, all I could see was a sea of white fluff. He knew he had done something he wasn’t supposed to. I couldn’t help but burst into laughter. At least it was an old couch! 🙂 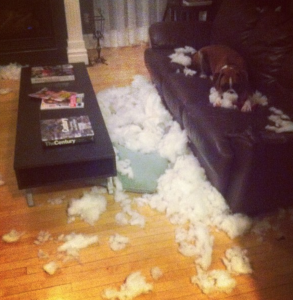 During a trip to my parent’s acreage in Saskatchewan, Moses lost to a porcupine while roaming the property late at night with my parents’ dog Ranger. He ran over to where we all were outside, crouched to the ground and when the light from the campfire hit his face we could see the quills. The closest vet was on-call 30 minutes away, so we drove him in. They sedated him and removed all the quills. Thankfully none hit his eyes. He was sleepy for a few days but otherwise, fine! 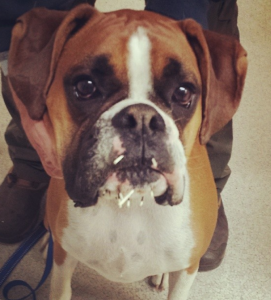 Ok, maybe that’s a bit of stretch, but hear me out. My in-laws used to live right on a lake in Calgary. One trip down, I took Moses right to the backyard when we arrived. He ran right down to the water and jumped off the deck. Boxers aren’t the best swimmers because of their big chests. I practically flew to the dock to rescue our baby (Ryan was in the house and couldn’t hear my shouts for help). I looked in and all I could see were swirls of water… no boxer. Finally he came to the surface, flailing his paws in total panic mode. I was wearing a really cute outfit, my hair was all done, etc. so I wasn’t jumping in until I absolutely had to! I had him by one arm until Ry finally came out to help me and we pulled him up.

The second time, the same scenario only this time with Ryan and the lake was partially frozen. Mo spotted a rabbit on the ice and took off. Thirty minutes later, after a frantic search and fears he may have fallen through somewhere, a very tired Moses came trotting back. Did he catch up to the rabbit? We’ll never know. 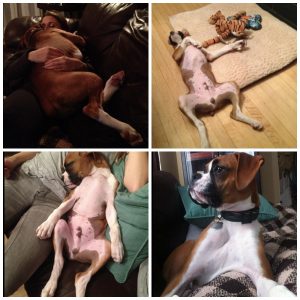 At four months old we decided to bring Moses to the City Market to shop for our Thanksgiving dinner. We felt so proud to be those people! Walking the market with our dog! We stopped to talk with one of Edmonton’s City Councillors (at the time) and Moses couldn’t hold it anymore. I’ll spare you the gross details but it smeared the size of half a parking stall all over the pavement right in front of someone’s booth. My husband Ryan apologized to the councillor while grabbing paper towel from a vendor, trying to wipe it up. It was SO embarrassing! 🙂 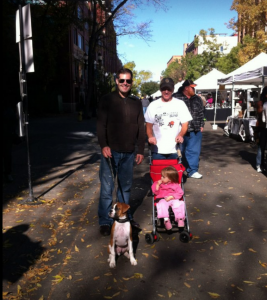 I share these stories only because they have positive endings! At two years old Moses was diagnosed with spine degeneration and our vet at the time told us we could try a few things but it didn’t look good. We switched to the Edmonton Holistic Vet and with one simple change in Mo’s medication (we took him off it and he’s now on a few supplements daily) his back is totally fine!

Two years later he was diagnosed with cancer but we caught it early enough that a simple surgery was the ticket. He’s on supplements to keep that at bay and so far so good!

We had just returned home from a trip to Jasper the day before and had yet to unpack our suitcases. We rushed out to an event that afternoon and returned home to a chocolate murder scene. Moses had got into Ryan’s suitcase which still had the hot chocolate mix we picked up while in Jasper. Hot Chocolate powder all over your white bedding is one thing but because he was obviously licking it, the wetness made it worse. Our master bedroom floor was also covered, along with Moses’ paws which he walked all over the house with. I phoned the emergency vet right away and were told to monitor him. He’s obviously fine and are brand new sheets are lovely too.

You can also read this incredible story of Moses’s animal intuition kicking in to help our son Wyatt. Above all, the way Moses is with our son Wyatt is the most meaningful to us. They have a special relationship. 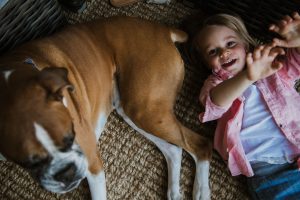 I would love to hear your favourite story about your pet! Post in the comments below!