You are here: Home / Motherhood / Pregnancy Q&A: The First Trimester

Pregnancy Q&A: answering all of your questions about our first trimester.

How I found out, how we shared the news, and a few hurdles we overcame.

I’m playing catch-up with pregnancy blog posts but didn’t want to miss answering a few questions we had early on about the first trimester.

How did you find out you were pregnant?

It was back in September, a week before my cycle was set to start. I dropped Wyatt off at school and took Monroe to the dog park. I felt really nauseous but thought there was no way I could be pregnant because I likely wouldn’t experience a symptom this early. After the walk, I had about 10 minutes before a meeting with my business coach (Amanda Wagner – go check her out) and took a strip test that came in the package with my fertility tests.

It wasn’t an early detection test but I thought I would give it a go. At first glance, it looked negative but after examining it a couple more times I could see the faintest of faint lines. Needless to say, my focus was way off during my meeting! LOL! When it wrapped I zipped out and grabbed two early detection tests which confirmed the news. I was home alone, tears of joy streaming down my face.

We had been TTC for two and a half years and had just taken the summer off of trying. This was our first month back, so I was super shocked!

If you missed our pregnancy announcement back in December – see it here! 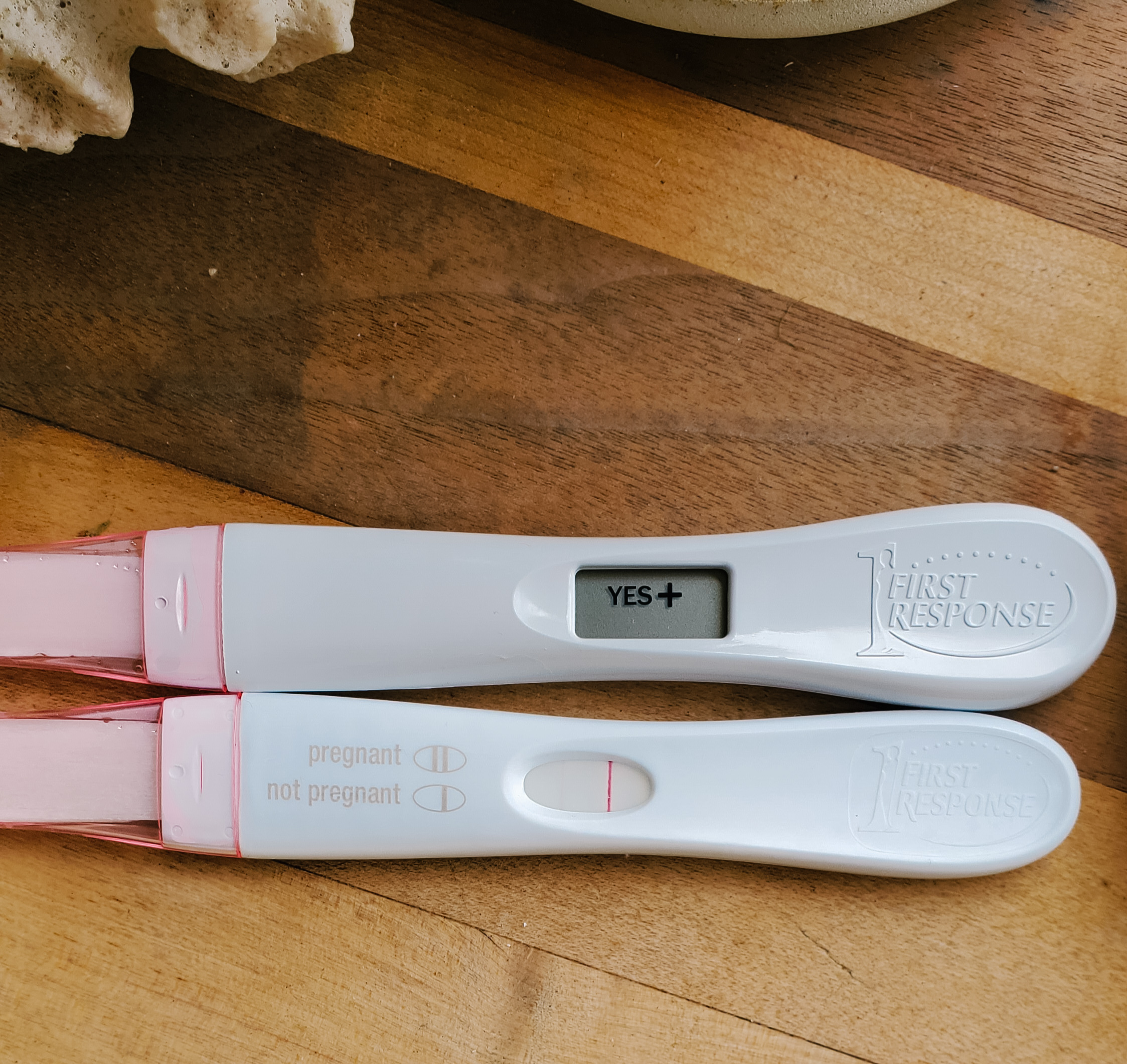 How did you tell Ryan?

I was dreaming up a bunch of fun ways to tell him but the second he walked in the door (the same day I found out) I just started bawling. When he asked what was wrong, I told him the news and we had a big family kitchen party celebration! Wyatt and the dogs had no idea why we were so happy but they joined in the excitement anyway. 🙂 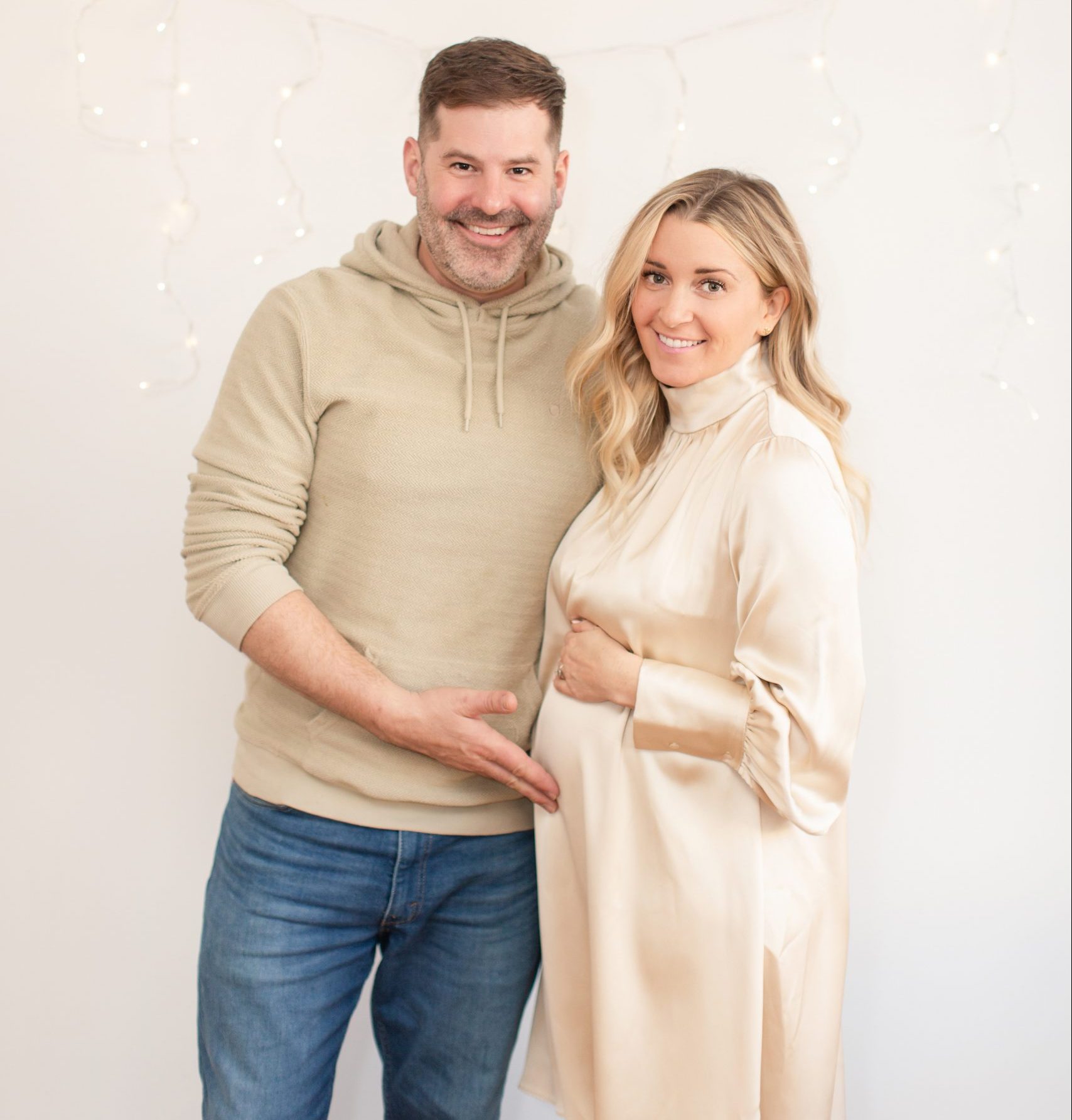 When did you tell Wyatt?

It was very early – six weeks. We were headed to my parent’s place in Saskatchewan for Thanksgiving and we wanted him to share the news with everyone. We told him two minutes before it was revealed to everyone else (his secret-keeping skills aren’t quite bulletproof). His reaction was so adorable. He asked to see my tummy right away. His face was lit right up! He’s very excited to be a big brother.

Watch Wyatt’s big moment and how we shared the news with some family and friends! 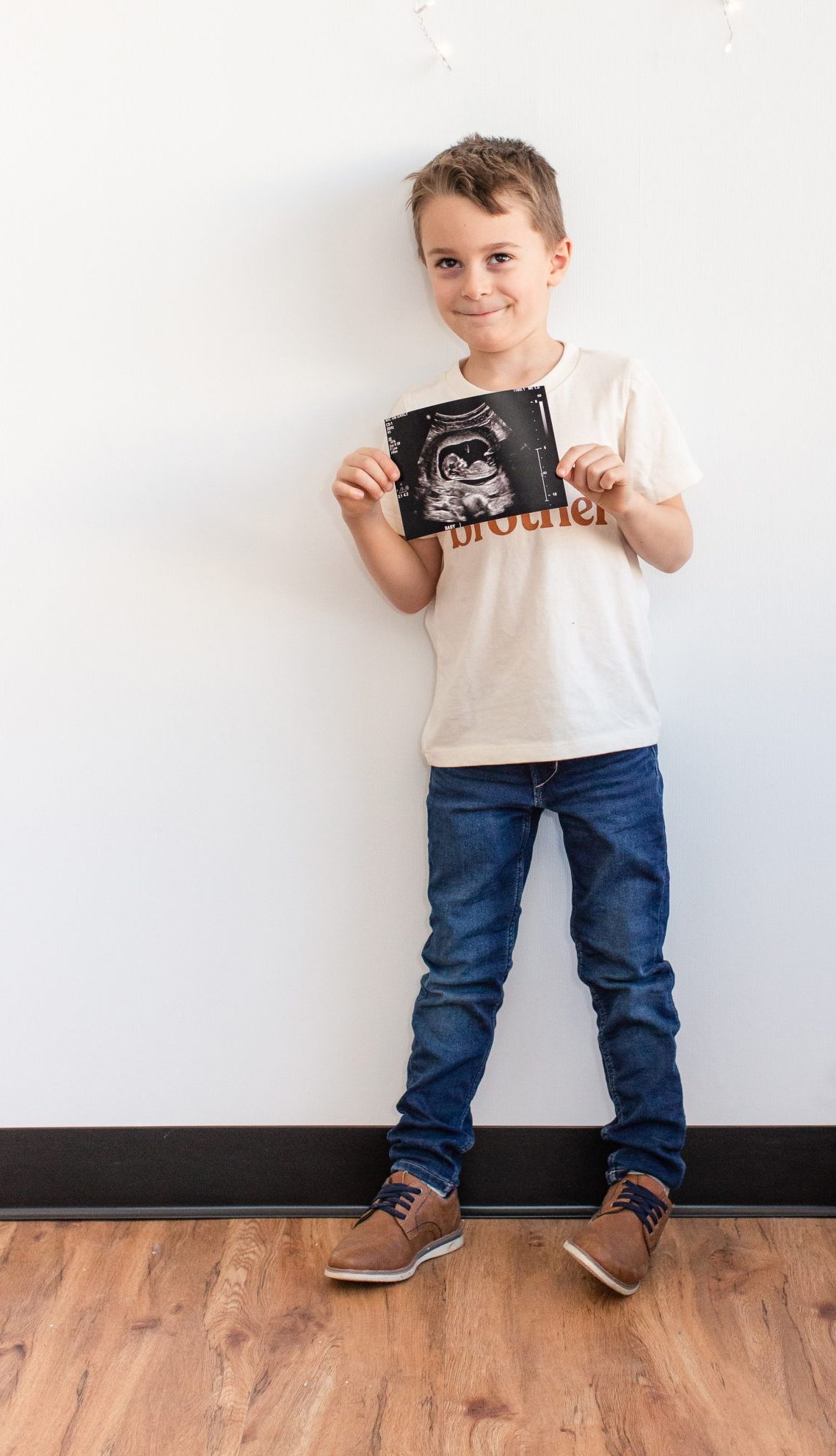 You’ve mentioned fertility struggles. How long did it take you to conceive?

It took us 2.5 years to get pregnant this time. We had met with the fertility clinic and were fully prepared to explore options but for some reason, even with the long journey, I just felt like it would happen naturally and it did!

I tried out several holistic treatments to help get pregnant, including acupuncture. I’m convinced acupuncture helped us conceive Wyatt. 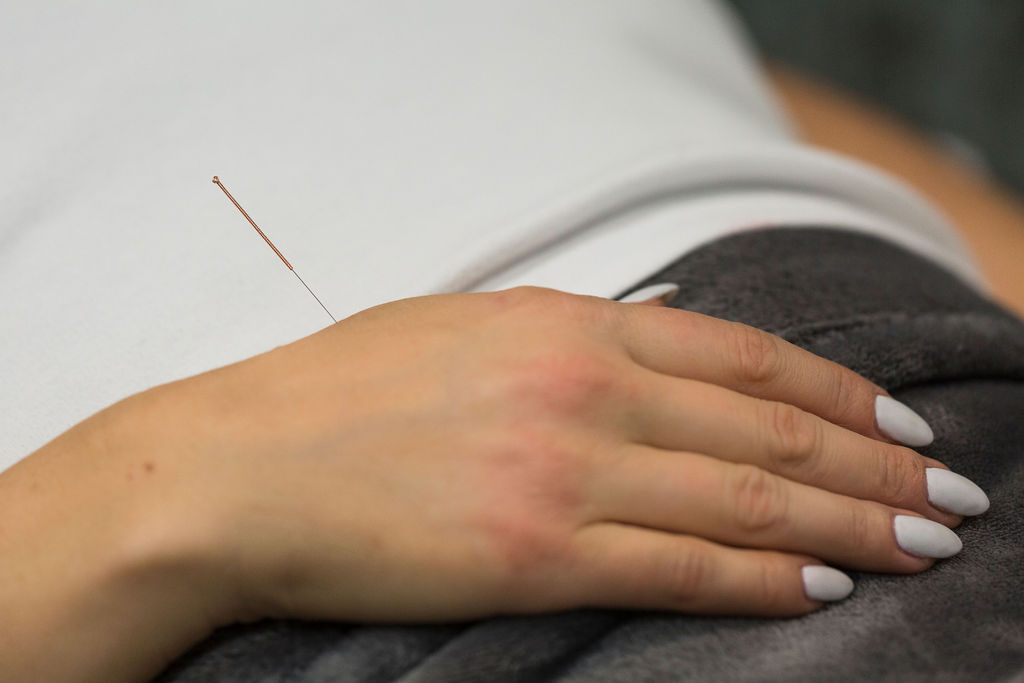 I’ve heard you mention a ‘rough/scary first trimester. Are you willing to share what happened?

Yes, there were some scary moments early on. At nine weeks Ryan and I were walking to our vehicle after our first ultrasound. We were on cloud nine, holding our first baby pictures and I started bleeding really heavily right in the parking lot. (A cruel twist of fate, really). I was taken by ambulance to the hospital.

With the Covid situation, Ryan wasn’t allowed in at first but several hours later they agreed he could come. I assumed I was having a miscarriage and I didn’t want to be alone in those moments. After seven hours in emergency, we learned that the baby was all good but I had a subchorionic hematoma (a bleed outside of my uterus). Up until this moment, we had never heard of this. We were told there was nothing to do but wait and hope that it went away. 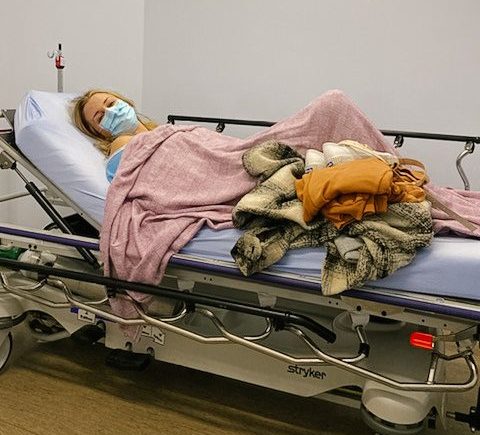 I was told to take it really easy for a couple of weeks so I basically went on partial bedrest. It was right at my busiest time with work and it felt so weird to show up on social and here at KariSkelton.com every day, not sharing what was really going on behind the scenes. Thankfully, the bleed dissolved just in time for my cerclage surgery (I have what’s called an ‘incompetent cervix’ and the cerclage is a stitch that keeps it closed until it’s taken out around 37 weeks). I also had a cerclage with Wyatt. I’m so grateful this procedure is available. 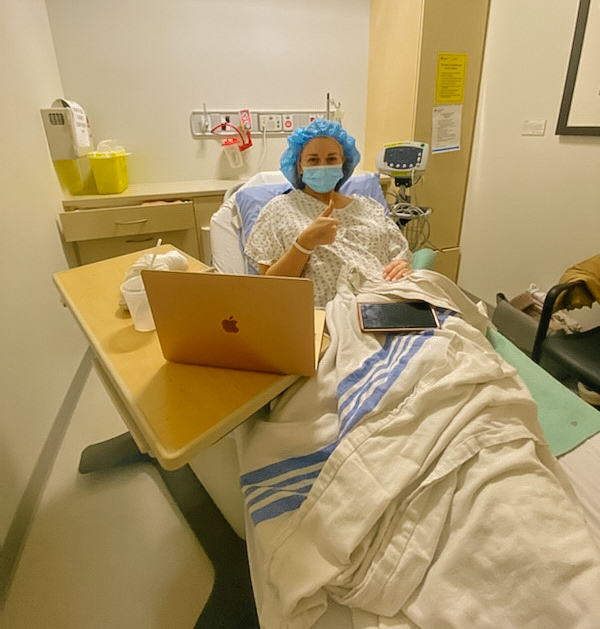 Two weeks after surgery we found out I had some abnormal blood work. I went for further testing and everything looks good but I’m being monitored pretty regularly. Several weeks after that, I got Covid (I was double vaxxed at the time). A lot of anxiety around that as well. In the words of my doctor, “You just can seem to catch a break.” Each day that passes in this pregnancy I’m so, so grateful. Our little miracle baby.

How are you feeling?

The first trimester was rough (as mentioned above). I felt quite nervous and anxious the entire time but there were lots of moments of joy too. Physically, I was super tired and always hungry. 🙂

Did you have morning sickness?

I haven’t actually gotten sick but I’ve had nausea off and on throughout the whole pregnancy. It’s pretty mild though. 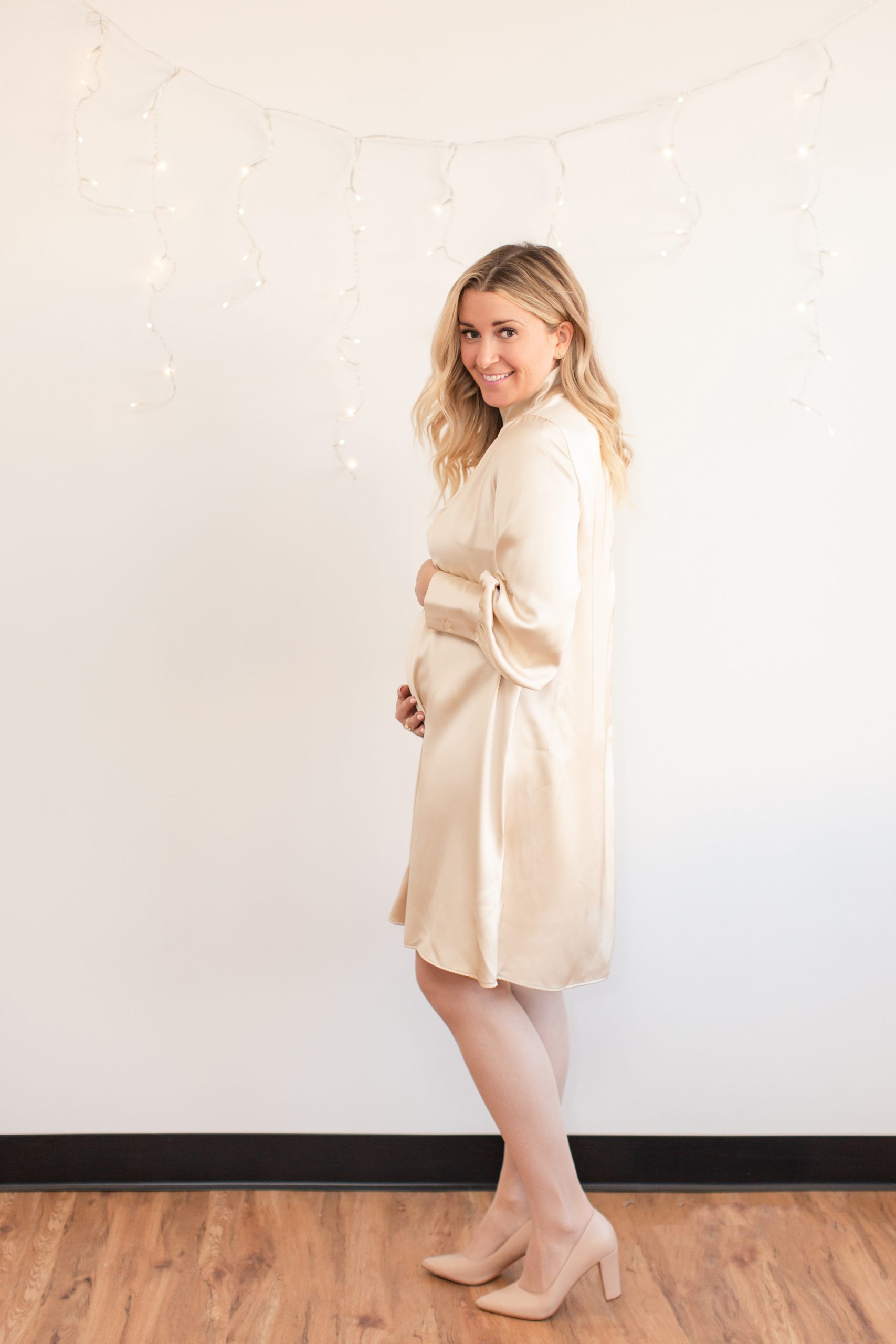 What are you craving?

The first trimester I craved carbs and soup!

Are you finding out the sex?

We aren’t! Not finding out until baby day. We didn’t find out with Wyatt either. I’m a naturally impatient person and I’m a big-time planner so this may come as a surprise to those who know me well. LOL!

I’ll be sharing a Second Trimester Q&A in the next couple of weeks and watch for a post soon on a few pregnancy and maternity items I cannot live without!

Feel free to ask any questions in the comment section below.

Fertility, Pregnancy, and The Vaccine

when you feel like you've hit your max bump but th

Life update. ❤ I’ll be keeping this piece of

when you feel like you've hit your max bump but th

Life update. ❤ I’ll be keeping this piece of